Over the past few weeks I have tried various combinations of odd and even numbers of squares to create a net frame. This week there is only one variation left to try (odd width and even length), so I decided to make a net frame with the following numbers: 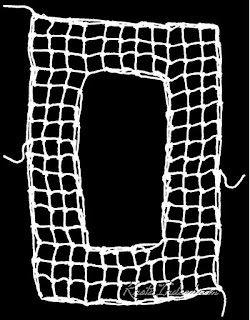 Increase Portion of the Square

Forming the top of the square

Start the Second Half of the Square
Tie the thread from the needle onto the bottom of the first loop of the last complete increase row.
1.       Tie the end of the thread from the shuttle to the appropriate loop.
2.       Without using a mesh stick, tie a netting knot into the same loop.
3.       Untie the original knot that joined the shuttle to the loop, leaving just the netting knot.

Finish the final row by netting these two loops together, but without a mesh stick.
Cut the thread near the knot just tied.

Remove the foundation loop from row one of the net.
Tie the tail onto a tapestry needle, which is used in place of the netting needle.
Net the first two loops together without using a mesh stick.
Cut the thread near the knot just tied.