I have been slowly working on one of the beautiful patterns I received from Herman Mangels. It has taken a bit of time since there are about 9,200 knots. But I finished it on Saturday and starched it yesterday. This one was designed by Martha Kupfermann. She called it Large Aster (well, that's an English translation of the German). It measures about 23 inches in diameter; the instructions said about 67 cm. It is hard to measure precisely since the edge is scalloped. 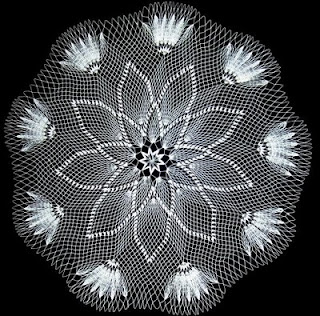 On a much smaller note (10.25 inch diameter) is the doily I made just before starting Large Aster. I was planning on re-making one called Ice Crystal. I thought I had followed the directions carefully for each round, so I was puzzled when, on round nine, I noticed that I had more loops than I was supposed to have -- twice as many.

Looking at the doily in one hand and the instructions in the other, I soon discovered my problem. On round four I was supposed to net 2 knots in a loop and then skip a loop around the doily. I had forgotten to skip the loops. No wonder I had more loops than I was supposed to have.

When faced with the decision of either undoing all the knots from round five to round nine, cutting off rounds five through nine, or creating a new doily pattern, I chose to create a new pattern.

It looked like a sunflower to me, but I already have a doily pattern named Sunflower. I decided to call it Helianthus. 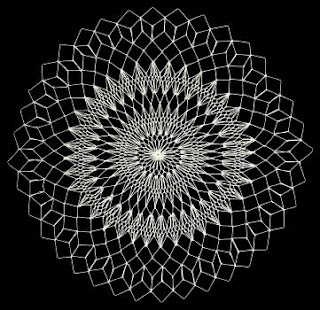 In the process of designing this doily, I ended up with a new decorative stitch which I called Flame.

Oh, I forgot to add one other thing that made me decide to create a new doily. I only had a limited amount of thread. I had chosen Ice Crystal because it used only a small amount of thread. The amount of thread also influenced my decision to try a new stitch, which eventually became Flame, instead of keeping all the extra loops and doing a different edge. I ended the doily with about a yard of thread left.