Last week, as I returned home from visiting my youngest granddaughter, I finished a circular net bag.  I had started the handle a couple of years ago when I was trying to figure out the size of net handles for my Net Like a Lace-maker class. 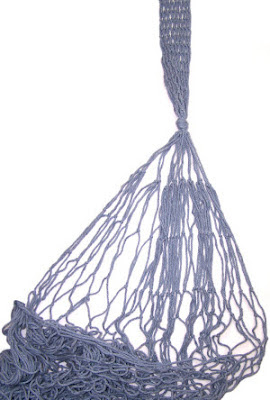 Because I had only finished the one long strip of netting, I decided to try a top-down net shoulder bag.

To make it long enough for a shoulder bag I decided to experiment with some wrapped loops at each end of the previously made net strip.

Decreasing the last two rounds brought the number of loops down to an amount that would work for a grommet. 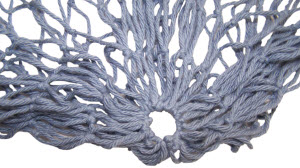 This bag worked up fairly quickly since I used a 1.5 inch mesh stick for the body of the bag.  The long wrapped-loops made the mouth of the bag larger than the spiral net bag discussed last week.  I finished the bag with only a few yards left from over from one ball of yarn. 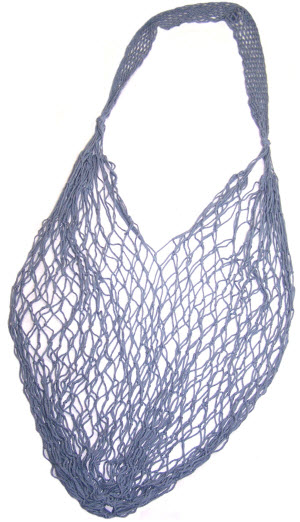 Next week I'll either show the third bag I finished on my trip, or announce that the Square-mesh Netting class is finally ready for students.

I hope it's the class.

Spiral Net Bag Made from the Top Down


This past week I have not had access to my computer since I was visiting a new granddaughter and her family. That meant I was not able to work on finalizing the Square-Mesh Netting class.

Of course there was no way I was willing to stop all netting during that time.  I found three handles I had made back when I was creating the Net Like a Lace-maker class, and  I took them on the trip with me.  I was able to turn all three handles into bags and use up most of each ball of yarn in the process. 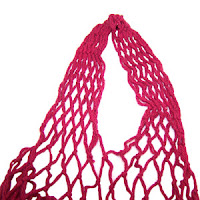 Here is one of the strips formed into a handle.  Below it is what became the rest of the bag. 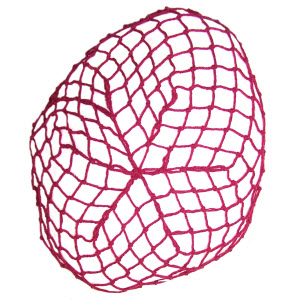 Before I knew it, I had a finished a net bag with two handles. 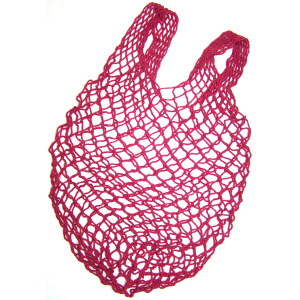 Next week I'll show the second bag I created. 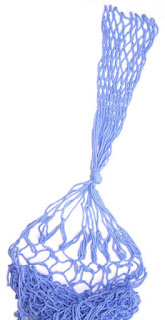 As I looked at the rectangle I realized why it was still a rectangle and not a bag.  It had a different number of squares in the width than any of my other square-mesh net bags.

That meant that none of the handles I had designed would work for this bag.

No problem.  I took some features I liked from a couple of the square-mesh bag handles and placed the overhand knot in a different location.

There it was.  A new handle.

And a new gift bag.  The tea-towel bibs fit in just fine. 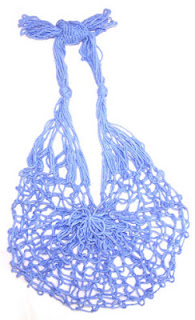 
Last week I started netting a new pink bag to hold my favorite baby bibs (tea towel bibs) for my new granddaughter.  This week I finished it. 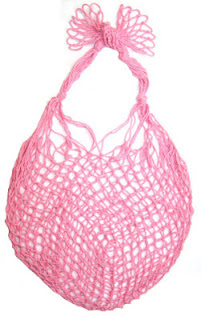 Unlike many I have made since the fall, this one is not made using square-mesh netting.  It is made with circular netting - from the bottom up.  I also adapted and combined some of my new square-mesh bag handles to work with this bag.

The bibs fit in nicely whether the bag is tied as a gift or a bag. 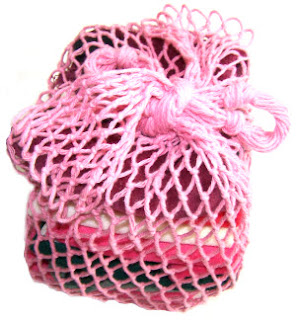 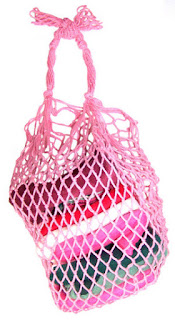 I've almost finished the last video for the square-mesh netting class.  I really want to have it done by the end of this month.  Then I've promised my youngest daughter I would get started on the circular netting class.


I realized this morning that I needed to make the bibs I planned to take with me when I visited my newest granddaughter in a few days.  So I did some multi-tasking and finished the bibs early this afternoon. 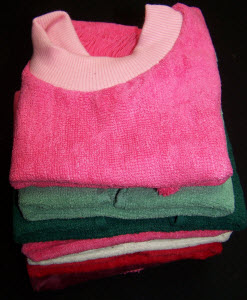 I thought I had a lovely pink bag already to hold the bibs. When I held the bag up to the bibs, I knew that they would not fit.

So I decided to start a new one. This bag starts at the bottom with a tiny grommet and then increases each row.  I just need to finish the body of the bag and the handles.  I hope to finish it early this coming week. 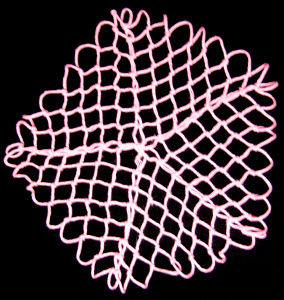 But for now, I need to get back to the square mesh netting class videos. When I finish the one I'm processing there will be only one left. Surely, I should be able to get it done next week.