Knitting and Netting - Sweaters and Doily

A few months ago my 19-year old son learned that he would be spending 2 years in Bulgaria. I had already started making him a couple of sweaters (single color,long-sleeved, V-neck) to take with him. My obvious goal was to finish them before he left. He leaves on Monday. 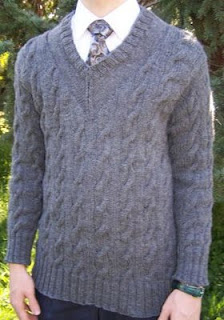 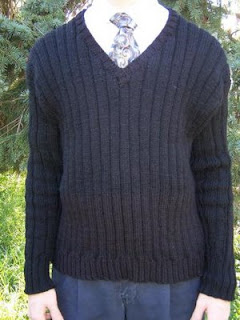 Both sweaters were made from the top down so I could try them on him and get them to fit him as he wanted.

It was the first time I made the ribbed one in worsted weight yarn.

I made the cabled pattern twice before (once for each of his older brothers).

It felt great to finish both sweaters before he left. I remember that when my oldest son left I was finishing the ribbing of the first sweater as we took him to the airport. I kept it to use as a guide to make the second sweater. The first sweater was a basic stockinette sweater and the second was the cable sweater. I had to mail both sweaters to him while he was still learning Portuguese and before he left the USA for Brazil.

I wanted to give a gift to a friend, so I spent a few hours and using my Grandmother's pattern made another copy of Springtime. 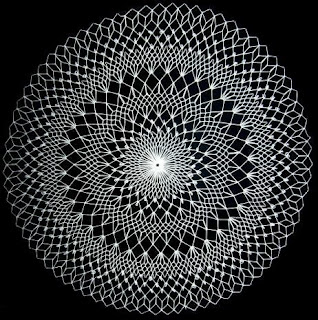 The last time I made this pattern I did not have a digital camera, and was unable to get a picture of the entire doily. Technology is great (as long as it works).

I am currently working on a net bag, with a side handle, made out of thin parachute cord. Oh yes, one other requirement -- mesh small enough so that a 1/2 inch diameter stick will NOT fall through. Pictures to follow when it is done.
Posted by Rita at 10:45 AM 1 comment: