In 1941 the first edition of Percy W. Blandford's book, Netmaking, was published.  It includes netting instructions for heavier cord.  There are many illustrations throughout the book.  According to the preface to the fourth edition, "the first edition of this book was written during uncomfortable evenings in an air-raid shelter in 1940."

The digitized version is located at http://pachamamatrust.org/.  Once you arrive at the website, click on the portion of the side menu labeled CORE and a new side menu will appear.  Click on Net & Rope (which is under Craft & Trade, which is under Employment).  The text and photos will appear on the right of the screen.

A special thanks to Anthony Emery for the link to this book.

The Eastern States Exposition (Big E) is held in September in West Springfield, Massachusetts.  This year I decided to go demonstrate netting.  During the 17 days it is open, I have been there netting for 7 days (about 4 hours each day).  It has been fun and exciting to introduce netting to those who stopped by while I was there.  Today was my last day, so I decided to take some photos of the lace demonstration area. 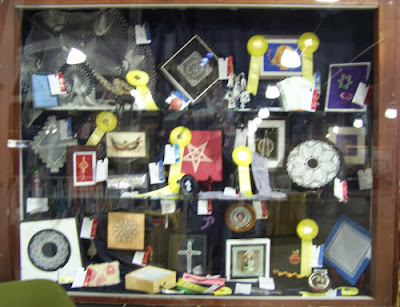 This case contains all the lace entries for this year, with the exception of the Best in Division.  There are examples of tatting, netting, and various types of bobbin lace. 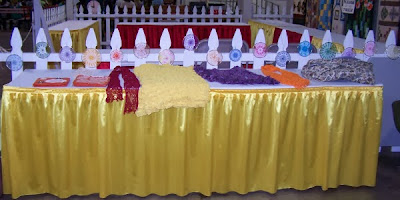 The picket fence was decorated with net sun catchers I made during the last two weeks.  Some of them were made at the Big E while I was demonstrating, and others were made elsewhere.  I will try to post them on my website with the other sun catchers as soon as possible.

On the table are net bags, net scarves, a net shawl, and stitch samples, as well as two small pieces of tatting.   I included the tatting because people tend to ask me if I am tatting, and I wanted to show them the difference between the two. 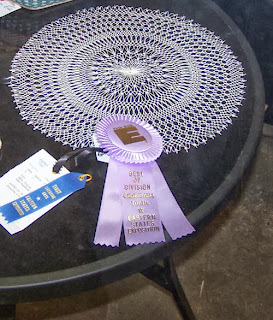 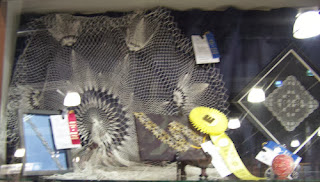 This is also the first year I have submitted something to the Big E.  I submitted two doilies, Pineapple and Crystalline, and Lantern, a small net covered ornament ball.  The large white doily on the left of the lace case is one of the two doilies.  The red ornament ball is in the lower right corner.

I'm already wondering what I will enter next year.


In 1954, Workbasket published Aunt Ellen's How-To Book on Needlework.  The netting portion of that book, with the exception of the Pineapple Handkerchief Edging, can be found on-line.  While many of the same stitches found in the 1800's are found here, this booklet is one of the few places that show both methods of netting.

The first two days I demonstrated netting at the Big E, I worked on a doily that needed to be redone so I could check the instructions and also get a digitized photograph.  Here is the photograph of Jasmine. 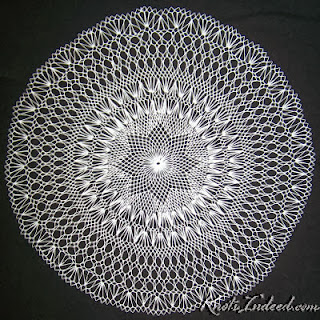 The rest of the time I demonstrated netting this week, I worked on sun catchers.  I'll post photos of them next week.  So far I have been able to get 3 done in 4 hours.  I might just finish all I want to get made by the time the Big E ends - I have about 16 hours and 13 sun catchers left.


This is the earliest book I know of that gives patterns for netting.  Natura Exenterata was published in 1655.  Some say it was written by "Lady Alethea Talbot & Countesse of Arundel & Surry & the first Countesse of England."  The portion of the book that was digitized was unclear as to the author.  I was excited to find netting patterns this early, over 350 years ago.  The type setting makes it a bit tricky to read since most of the time the lower case letter "s" looks like the letter "f."  I had to keep reminding myself that the word that looked like "firft" was really "first" and that the word "ftitches" was really "stitches."

I'm still not sure I got them all correct.  If you find something I transcribed incorrectly, please let me know, and I will fix my mistakes.

On November 3, 2012 I discussed the single netting pattern contained in the Manual of Knitting by Mrs. Mee and Miss Austin - a jupon.  Tony and I commented about the use of netting as underwear and vests.  I was intrigued by the concept but have not yet made the time to create such a garment.

I got an email from Tony this week. He said:


I do a lot of walking in our neighborhood and thought that this reflective vest was a good idea but way too expensive.  I made this vest . . . using one 85' continuous strand of day-glo paracord.  No ends showing as in the ad.  Now they can see me coming. 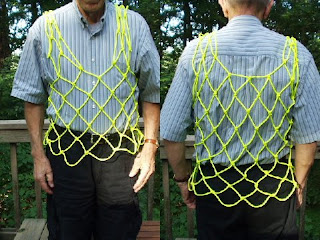 Thank you, Tony, for the photos and the idea.

Today I spent 4 hours demonstrating how to net lace at The Big E in West Springfield, Massachusetts.  This is supposed to be the largest fair in the Northeast, and it is big. I joined with some friends from the SCA (Society for Creative Anachronism), and we all dressed in pre-1600-style clothing.  It was fun to see the weaving, embroidery, and drop spinning that was going on.  Of all the people that passed by, only one person asked if I was netting.  I really should have some kind of prize to give to people like that.

This week I finally got around to photographing some of the netting I have finished recently - a scarf and two bowl covers.  These items can be found on Knots Indeed with more information about each item. 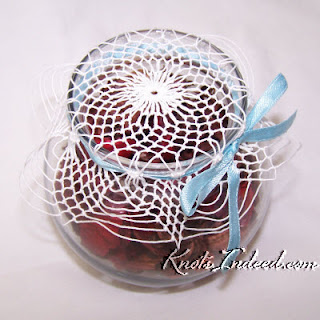 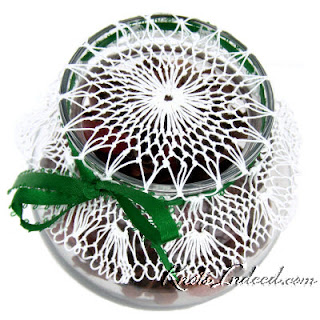 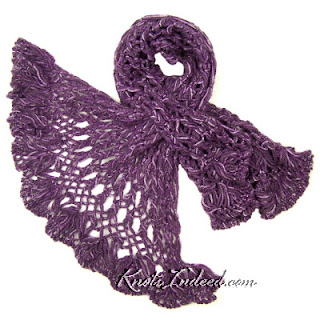