Several weeks ago my middle daughter sent me some information about the 2009 Special Olympics World Winter Games Scarf Project. It interested me, so I bought two skeins of blue and one skein of white. I found the white skein I already had and began to knit.

The first scarf I did was a ribbed scarf similar to the pattern found on the Coats and Clark Website. 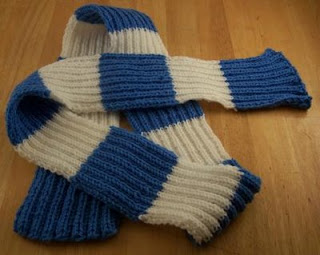 Since I don't like to do the same thing over and over, I decided to do a two-color, ribbed moebius scarf adapted from Cat Bordhi's book A Treasury of Magical Knitting. 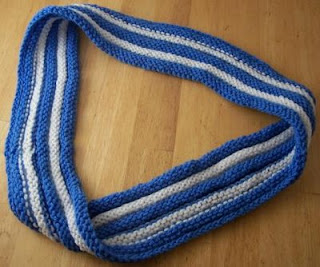 At this point I decided to try netting a scarf. Since I had to use the two colors, I decided to wind the two strands together onto my netting shuttle. Several years ago I received instructions from David Keller for a "Blizzard Buster" net scarf.

When I asked for more information about his Blizzard Buster scarf, David replied, "For the Blizzard Buster I like to use fuzzy, soft baby yarn, or angora. Using a 1" mesh stick, I make it 16 across and net 64 to 72 rows. I finish
by putting fringe on the ends. For the little ones I adjust the size down."

I wondered how this yarn, and two strands of it, would work with his instructions. I liked the way the two colored strands worked together. I used both colors for the fringe.

I started another knit scarf at this point - a seed stitch pattern, but it was taking more time than I really wanted to spend, so I asked myself, "What would a scarf look like if I used two strands of yarn in the moebius scarf pattern?" The only way to know for sure was to try it. So I tried it. 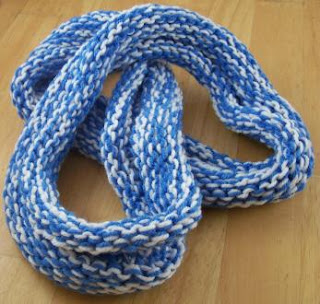 It worked out just fine, though as you can tell, the stockinette stitches want to roll to the center. 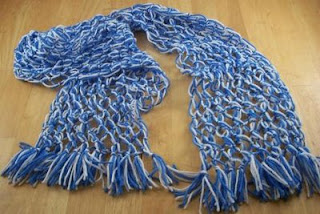 By this time I had finished the first skein of each color and started the second. I wanted to see how the ivy stitch looked as a scarf. 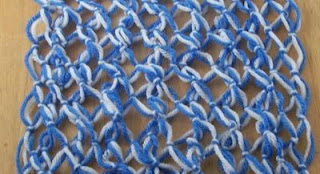 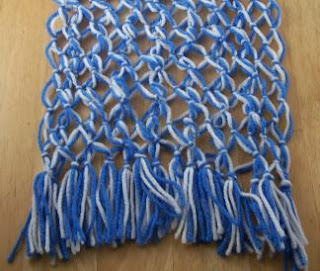 These two rows alternated until the scarf was the length I wanted, about 6 feet. Then I added fringe to the ends.

I still had some yarn left, so I decided to try netting another scarf. 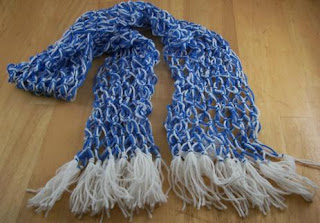 This time I chose to use the cube stitch. It did not take me long to realize that this pattern is very close to the ivy stitch. It is a four-row pattern. 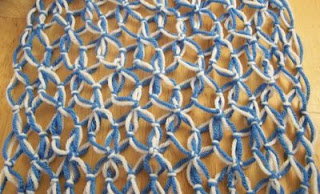 As I looked at the scarf I realized that I could see not only the "cube" I was expecting but also a "6-pointed star". This stitch has certainly moved up in my list of stitches I really like.


While I was still working on this scarf, my youngest daughter came to me and asked how easy it was to make a moebius scarf. She wanted to have some mindless type of knitting to work on while she was listening to some presentations and participating in discussions in her AP English class. I measured off the yarn I figured would finish this scarf and gave her the rest of the blue and white. When she came home she had used up all the yarn and was a bit more than half way done. I looked at the seed pattern scarf I had started (one square in blue and one in white) and decided to "frog" it and hand her the yarn to finish hers. After all, what are mothers for if not to help their daughters in their knitting experiences? 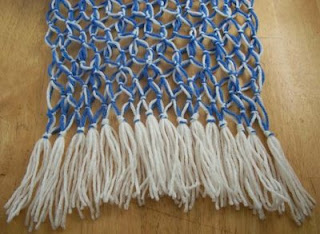 So when I finally finished this scarf, I had to go hunting for some white to use for the fringe, since all the blue was gone.


So with 4 skeins of yarn (2 blue and 2 white) my youngest daughter and I were able to create 7 scarfs. It was fun, provided a chance for creativity, occupied our fingers, was a good conversation starter, and gave us the opportunity to provide encouragement to those who participate in the Winter Special Olympics. That's not bad for about $12.
Posted by Rita at 1:25 PM 3 comments: