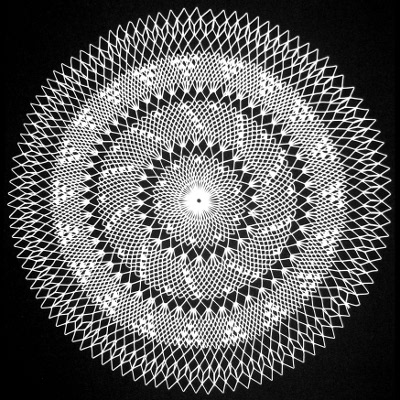 The Lady's Dictionary of Needlework by Matilda Marian Pullan


As I looked at Matilda Marian Pullan's book, The Lady's Dictionary of Needlework , published in 1856, I noticed that the patterns are for stitches and not for objects.  She describes how to get ready to net and how to tie the netting knot.  She has an illustration at the beginning of many of the stitches.


I want to have a photograph showing the entire doily for each doily I have a photocopy of.  This doily, Star In The Center, is one of the last of those that my grandmother designed that did not have a digital photograph.  Here is the photocopy. 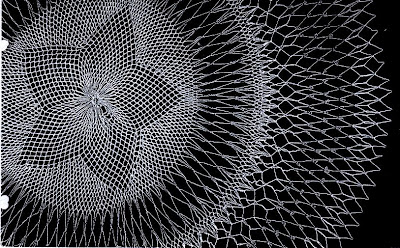 Here is a photograph of the full doily I just finished. 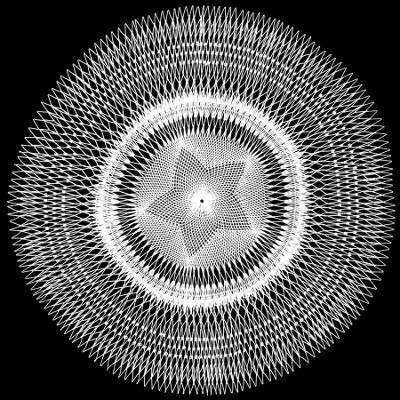 Treasures in Needlework by Mrs. Warren and Mrs. Pullan


Many of the net patterns included in Treasures in Needlework by Mrs. Warren and Mrs Pullan are accompanied by an illustration.  Several of the patterns, both diamond-mesh and square-mesh, have designs darned into them.  The digitized copy was published in 1855.

Back in the early 1980s I was able to obtain photocopies of many of my grandmother's doilies.  My aunt, who still had the doilies, placed the doily on a copier, covered it with something black, and copied it.  That meant I could tell how big it was supposed to be and what size mesh sticks Grandmother had used.  Over the years I have gradually written up the instructions.  Once I got a digital camera I photographed the doilies.

One of the doilies was too large to entirely fit on one copier screen, so my aunt made two photocopies of that doily.  Eventually I combined the two photocopies into one - to remind me what the doily looked like. 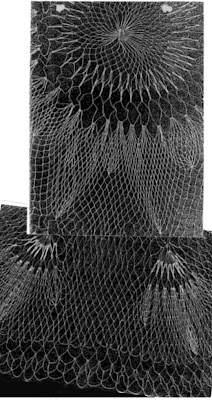 I kept putting off making this doily because I knew it would take many hours to complete.  Then, in January of this year, I had the opportunity to travel for several hours and no other project to work on, so I started Grandmother's Pineapple Doily.  I finished it in March.  It contains 13,240 knots, measures 38" in diameter, and uses 400 yards of size 10 crochet thread. 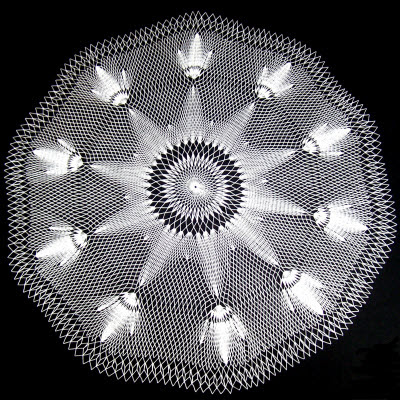 Looking back, it did not take me nearly as long to make as I had anticipated.  Life is like that sometimes.  We put off doing something, only to find that when we get started, it is quicker and easier than we expected.


Although she lists several uses for the "delightful art of netting" in her introduction to The Ladies’ Complete Guide to Crochet, Fancy Knitting and Needlework, published in 1854, Ann Sophia Stephens leaves the instructions and patterns for "sleeves, cuffs, rigolettes, and over-shoes" to others.  Besides the introduction, which briefly discusses the uses of netting, the book contains only two patterns for netting.  Both of those patterns involve square-mesh netting.  She does note on page 94, "All the designs given for D'oyleys and AntiMacassars in square crochet may be equally well worked in square netting, the pattern being darned in afterwards."

One of the net bag patterns I had sitting on my computer was for a single-handle, spiral, top-down gift bag.   I decided to make it not once, but twice, since I needed two gift bags for a baby shower for twins.  I decided to make the blue one with a moebius handle.  The pink one has a regular handle. 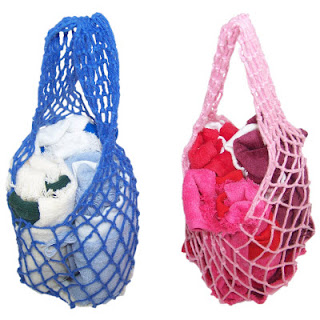 The pattern claimed to have a hexagon base.  It's true that when I started decreasing for the base there were six decreases that occurred in several rows, but I'm not sure I could truly call it a hexagon base. 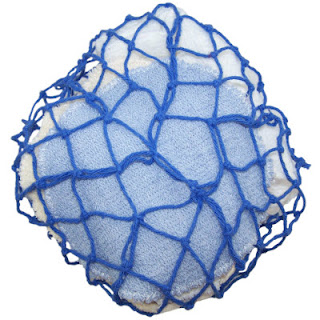 This is because, when making it, once I reached the point where I had only six loops left in the round, instead of netting them all together with one knot, like I did for the pentagon bags, I decreased the loops down to three and then joined them with one knot.

If you look closely at the base, you can see where the six decreases are.

The base does not look like a triangle because the bag was made using spiral rather than circular netting.

What would you suggest I call the base of this bag?