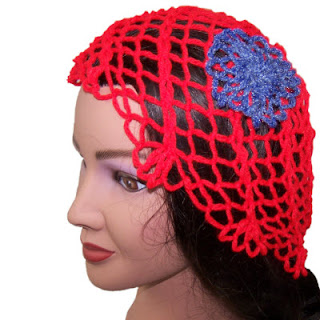 As you can see on a back view of the hat, the nine Diagonal Netting Stitches gently curve around the hat. 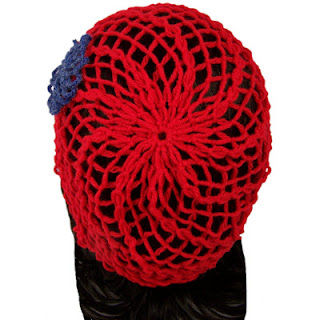 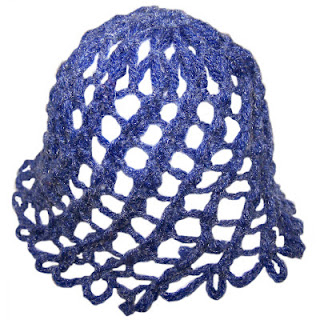 I said small hat because even though I had the same number of  loops in this hat as I did in the one above, the red one would fit an adult and the blue one would fit a new-born.  There are two reasons this happened. First, I changed  from a 1/2" to a 3/8" mesh stick.  Second, I removed the plain stitches from the pattern and made all the stitches the Diagonal Netting Stitch.  This stitch pulls the netting closer together and results in a smaller piece of netting for the same number of stitches.  Either change by itself would have resulted in a smaller hat.  Doing both in the same hat resulted in a very small hat.

Since I want to see how this hat pattern looks in an adult size, I'll be working with either many more loops per round, or a bigger size mesh stick, both slightly more loops and a larger mesh stick as I try the pattern again this week.

The net hat idea is interesting. Have you tried wearing them? I'm wondering how well they hold still while in use.

Somehow they are less hat like to me without the bulk given by crochet. But netting is always less bulky. I wonder if instead of heading for the knitted/warm hat look you went more for the summer sun hat look? You'd need something for it to keep it's form. I wonder how long starching it and drying it over a hat form/straw hat would last? Or maybe it'd need to stay attached to the straw hat?

Anyway, glad you are having fun make anything you see out of netting. =)

I did try wearing one while driving in the car with the windows down. It kept my hair from blowing in my eyes.

I was nervous about it blowing out the window, so I did not use it long. If I do it again, I will first fasten it to my hair with a clip or bobby pin.