Another project gets completed!!! Today I finished 3 couch cushion covers and was able to stuff the cushions into the covers. They fit!! Under the supervision of the mother of one of my piano students, my youngest daughter has been re-upholstering our couch as a Young Women Personal Progress Project. I told my daughter that I would help her by doing the cushion covers. Now she needs to finish a bit of hand sewing and the couch will be done. It looks great and I am so proud of my daughter and the skills she has learned.

I have also been looking at net circles trying to decide which to use as the bottom of the next string bag I am planning to make. 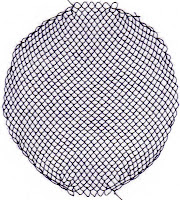 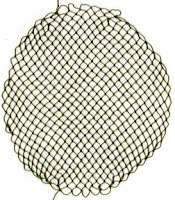 This one has 634 knots with 48 loops around the edge of the circle. 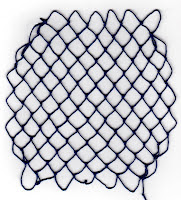 This one has only 123 knots and has 24 loops around the edge of the circle. Because of the small number of knots this one looks the least like a circle, but put it at the bottom of a net bag, use a 1" instead of a 3/8" mesh, and no one will know what it looked like before the bag sides were added.

I also made a circle with 440 knots that had 46 loops around the edge of the circle. But, because I made it with a 3/8" mesh stick, it was too large to scan. Actually, I think that this is the circle I will probably make, although I will most likely use a #8 double pointed knitting needle as the mesh stick and some size 10 crochet thread. I need a small bag to hold the stamps I use when teaching piano lessons. However, due to the lateness of the hour and commitments already made, I will have to wait until Monday or Tuesday afternoon to try making the circle and the bag.
Posted by Rita at 11:11 PM