I have long enjoyed looking at the Double Fan or Sheaf Design, but could not find an explanation for how to make it until I found the Edging in Double Fan or Sheaf Design found on page 112 of Tatting and Netting, by Butterick Publishing Company.  This is the first of two ways explained in this book to create this Sheaf pattern.  I had hoped that it was strictly a net design; however, I discovered that it needed a hand-tied knot, made after the netting was finished, to form the Sheaf. 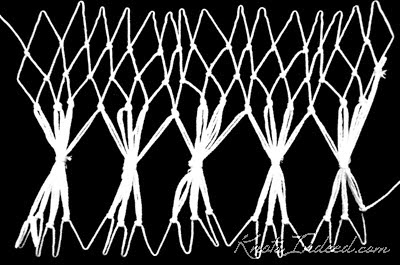 I received an e-mail from Anthony Emery describing the technique he had used to start a duffle-type shoulder bag.

He said:  "After posting a photo of this bag at a forum I received requests for a tutorial. I adapted it from the book "Net Making" by Charles Holdgate. The tutorial only shows how to change from the flat netting that is made on the first row of netting to circular/tubular netting. I left the number of meshes and size of the gauge up to whoever tries the technique. . . . Here is a link to the tutorial http://pineapple.myfunforum.org/sutra3431.php#3431 and here is the bag."

Charles Holdgate used a 1", 1.5", and a 2" mesh stick.  The beginning row was made using the 1.5" mesh and the final round with doubled thread used the 2" mesh.  The rest of the bag was made using a 1" mesh.  Of course any size mesh could be used, depending on how you plan to use the bag. 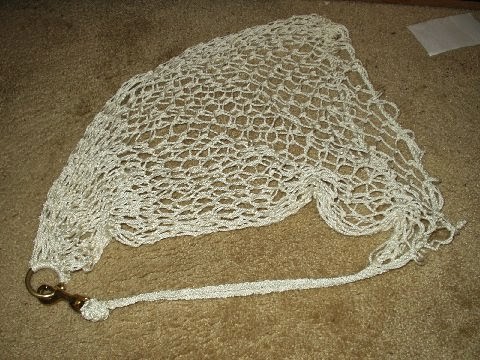 When I asked Tony about the drawstring, he replied: "To make the drawstring I used the method shown here http://pineapple.myfunforum.org/about1654.html.  I used the same cord I used for making the bag. I tied a loop of twine between the fixed point and the drill (I did not triple the single cord as shown in the tutorial) and proceeded as shown.
It is MUCH easier and quicker to use this method. http://pineapple.myfunforum.org/about1668.html"

Now I just need to find a hand drill.

You can use a variable speed power drill on slow speed. Works just as well.


Years ago (early 1950's) in grade school we would take a loop of yarn. Place one end of the loop over a chair knob or other object. We would put a pencil in the other end of the loop and twirl the pencil until it could not turn any more. Hold the twisted loop in the middle. Bring the ends together. Let go of the middle, and the cord would twist on itself. Same results. Simpler method. Tony

I have used a pencil and twirled it around to make the cord for a hairnet.