Several years ago I ordered a paperback copy of The Ladies’ Hand Book of Fancy and Ornamental Work by Florence Hartley.  It was originally published in 1859.  If I had known that it was online, I would have just downloaded it.  The contents are the same.

Over the years I have re-created 62 different doilies patterns that my grandmother created.  She did not write down any instructions; she just made the doilies.  She taught me how to "read" a net doily and then make it.  These doilies included those she gave me to use as patterns, some my mother owned, one owned by her sister-in-law, Ida Winter, and photocopies of doilies in the possession of her daughter, Elaine.

I finished writing the doily instructions several years ago.  At that time, after I finished making the doily, I made a photocopy of as much of it as I could.  Often that was just a rectangular section from the center to the edge.  Eventually I purchased a digital camera and started taking a photograph of each doily so I could see what the entire doily looked like.  Since I had given away most of the doilies I had made, I had to start making them again.

This week I finished Sunburst. 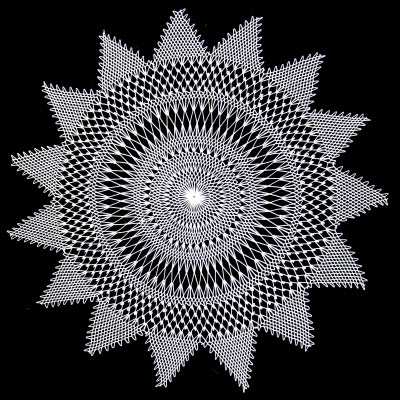 I thought it was the last one I needed to photograph; however, while looking through my patterns, I discovered an additional Pineapple Doily that Grandmother had made.  The edges of the two doilies are slightly different, so I guess I have one more doily to finish and photograph before I can say I have digital photographs of all the doilies I have access to that my grandmother designed.  To see those I have made, look at Grandmother's Legacy.