The Illustrated Girl's Own Treasury

The Illustrated Girl's Own Treasury does mention netting several times and describes how to make it, both  plain and fancy stitches.  There are also several illustrations included.

Back in 2007, I net a small bag using crochet thread.  The base of the bag was net first in the shape of a circle.  I wrote down everything except the amount of thread I used.  Recently I figured it would be a good idea to know how much thread I used, if I wanted to let others use my pattern, so I followed what I had written down and made the following bag. 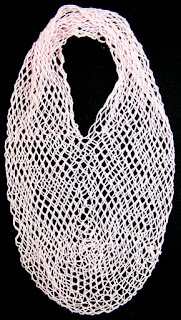 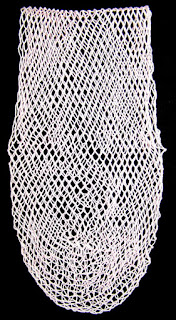 When I showed my newly-completed bag at a local knitting group, one of the women exclaimed how perfect it would be to use when she went to an event where she did not want to carry a large handbag.  This bag would hold her wallet, keys, and maybe even a sandwich.  She could place it on her arm, and it would not slip off.

I liked her idea but explained that the size 10 crochet thread I had used may not be up to the stress which keys and a wallet might place on it.  Some of the threads had broken on my original bag, and that bag had just carried lightweight self-inking stamps. 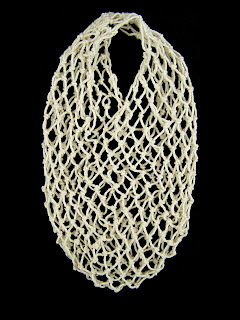 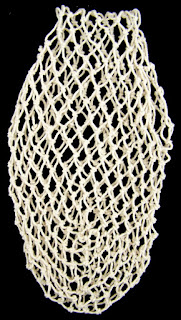 I suggested making it with larger mesh and and string.  The string would be much sturdier and less likely to break.


I finished making this bag at the Connecticut Sheep, Wool, and Fiber Festival.  I thought that location was very appropriate since that is just the type of event my friend would use it at.

She thought it was just perfect, and now I know just how much thread or string each bag takes to make.

Rita,
I like your shopping bag. It uses a wider base than the spiral netting bag that I made for this tutorial
http://pineapple.myfunforum.org/about1774.html
I don't know how you find all these e-books that include netting. Thank you for sharing. The doilies that you have shown in the past few post are true works of art

Tony,
I think there is room for both types of bags. Creating the triangle was something new for me. I want to design a net shopping bag that would be the same size as the plastic ones they use in stores.

Over the years I've seen blogs or forums that mention old knitting books that are on line and I check them out to see if they also have netting patterns. They often do.