I was intrigued by the concept of starting in the middle of a square of square-mesh netting and achieving a square.  The first time I made it, I used the same size mesh stick all the way through. That created a noticeable, wide zig-zag row through the middle of the square. That row is bigger because the loops formed in the first row also include the knots that fasten it to the foundation loop. When the foundation loop is removed, the loops expand as the knots is untied. 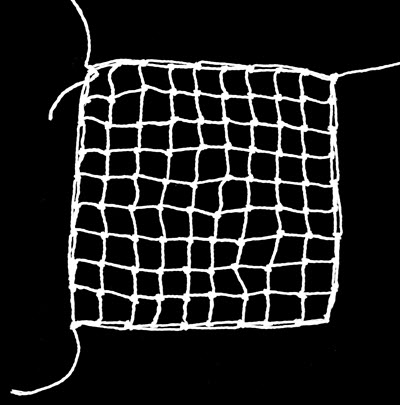 To solve the problem, I used two mesh sticks, one slightly smaller than the other. The smaller mesh stick or knitting needle will be used for the first row only. (The larger the cord or thread, the greater the difference needs to be.)

When I remade this sample, I made it with size 5 crochet thread, and used a #8 and a #6 knitting needle. 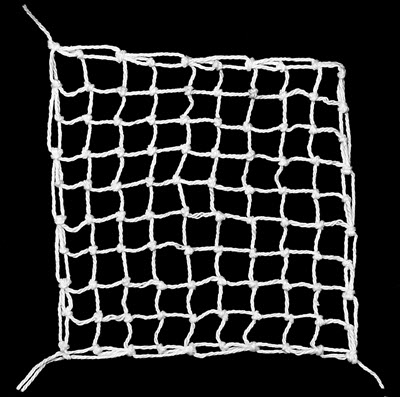 Here are my instructions for creating this piece of square-mesh netting.


Before starting the actual netting:

Continue by repeating row three. Each row will have one less loop than the previous row.  When there are only 2 loop on a row, net those two loops together without using a mesh stick.

To finish the square:

Repeat Row 3.
Continue by repeating row 3. Each row will have one loop less than the previous row.
When there are only 2 loop on a row, net those two loops together without using a mesh stick.