Edging: Double Fan or Sheaf from The Young Ladies' Journal Complete Guide to the Worktable


I think this is a first.  The same edge from two different books. Almost a year ago (25 October 2014) I made an edge from page 112 of The Art of Tatting and Netting.  When compared to this edge from page 131, item #38 of The Young Ladies' Journal Complete Guide to the Worktable, the names are close: Edging in Double Fan or Sheaf Design and Edging: Double Fan or Sheaf. The illustrations look similar and the instructions for rows 1-5 are word-for-word identical until you get to the heading and then they are the same thing said slightly different.

The Art of Tatting and Netting was published in 1895 and The Young Ladies' Journal Complete Guide to the Worktable was published in 1885.  I wonder if this was a very common pattern or if the editor of one book "borrowed" it from the other book.

I wish I could find a way to get this look without tying each sheaf together after everything else is finished. 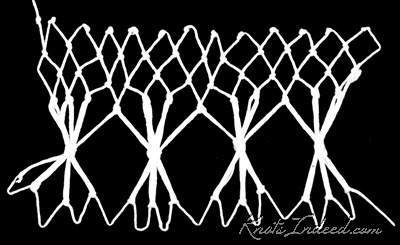 Here are my notes on making this edge.

Row 4: (1" mesh stick and a netting needle filled with double thread)
Net 1 knot in each loop.


To form a sheaf:
The long loops of row 4 are caught together in clusters of three double-thread loops. The thread is wrapped around the center of the loops and then fastened in the back (the thread ends are cut short).

I finally pulled the photos taken at the Big E (Eastern States Exposition) from my camera. From the 10 days I demonstrated, I can count on one hand the number of people that were knowledgeable about netting. There was actually one person who asked me what I was netting.  That made my week!

More common questions or comments were:
"Is that tatting? My grandmother (or aunt) used to tat."
"I've never seen that before!" 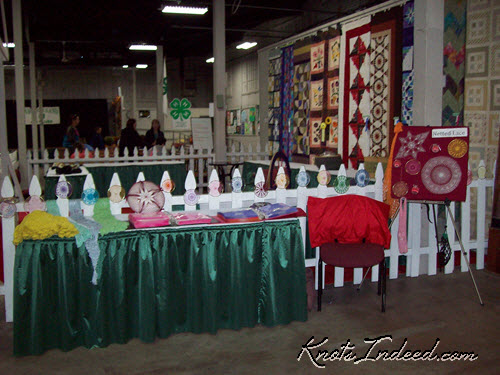 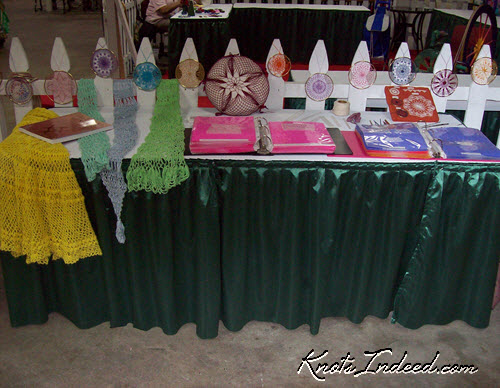 It was extra fun this year to have one of my granddaughters demonstrating netting with me on two different days.